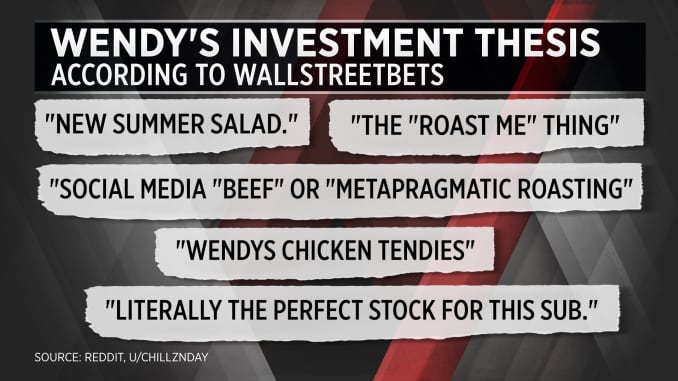 CNBC’s Jim Cramer on Tuesday said the Wall Street Bets investing crowd is flexing its muscle on analysts after the online investing group sparked an unsuspecting rally in Wendy’s shares.

The stock surged to a record after catching an endorsement in the popular Reddit forum responsible for big moves in GameStop and AMC Entertainment this year.

“I want you to forget the analysts right now. The person in charge of Wendy’s is Reddit user Chillznda,” Cramer said on “Mad Money.” “With that [user] and some other favorable anonymous posts, Wendy’s stock explodes higher.”

Wendy’s shares rose almost 26% for its best trading day in more than a year. The momentum helped push other restaurant stocks such as Wingstop, Domino’s and Shake Shack higher Tuesday, he added.

Cramer noted that the endorsement was a departure from the headline-grabbing short squeezes that put a spotlight on the group of retail investors, which grew in size during the coronavirus pandemic.

A short squeeze happens when investors who make a bet that a stock price will fall are forced to cover cut their losses if the price rises instead.

“Now they’re spreading their wings, even into an institutional favorite like Wendy’s with a very low short position,” Cramer said.

While Wendy’s and other meme plays can be considered overvalued by traditional valuation measurements, the market must reckon with a new class of investors, Cramer said.

“These metrics matter because everyone uses them,” he said, such as earnings per share projections. “If enough people with enough money start valuing stocks a different way, their new metrics matter, too, even if you think they’re absurd.”

“Eventually the meme stocks will run out of steam, but for now I think they’re just getting started.”

Become a permanent resident, or better still, a citizen of the amazing country of Vanuatu.  We are Trade Board Limited and can help you with either one.  Visit our website at https://tradeboard.biz, then contact us.