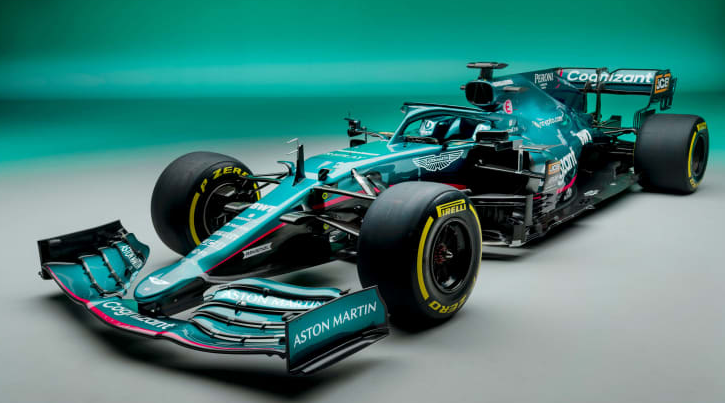 British luxury carmaker Aston Martin on Wednesday launched a new Formula One car ahead of its return to the most famous motor racing event in the world.

The Aston Martin Cognizant F1 team revealed the “AMR21” car at a virtual event that was broadcast from London. The AMR21 will compete in the 2021 Formula One World Championship, which gets underway on March 28 in Bahrain.

Formula One is watched by millions of fans around the world and everyone from Ferrari to BMW to Mercedes has used the sport to promote the strength of their brand.

Aston Martin has been struggling financially and its share price on the London Stock Exchange fell sharply in 2020. The company is hoping that Formula One will boost sales of Aston Martin road cars like the DB11, the Vanquish and the Vantage.

“To have a platform such as Formula One to market our initiatives, show our technology, and ultimately bring that technology into our road cars … is a huge game changer,” said Aston Martin Executive Chairman Lawrence Stroll, adding that it’s a “monumental” moment.

Stroll acquired the Formula One team two-and-a-half years ago and became executive chairman of Aston Martin last April, taking a majority shareholding in the company in the process.

“The first step was to raise the financing to see our business plan through for the next five years,” he told CNBC’s Julianna Tatelbaum. “We raised $800 million in equity, with the majority of that coming from myself and my consortium. That was for a business plan that brings us to 10,000 cars, $2 billion of volume and $500 million EBITDA in the next four years.”

Stroll said Aston Martin has a fantastic order book going forward on its sports cars and the new DBX, which is Aston Martin’s first SUV. He added that variants of the DBX will be coming in the near future and that a hybrid will be launching in the fourth quarter of 2021.

Aston Martin’s last Grand Prix car was the DBR5, which was driven by Roy Salvadori and Maurice Trintignant in the 1960 British Grand Prix.

The new car will be driven by Germany’s Sebastian Vettel and Canada’s Lance Stroll.

“Even though I have raced for four Formula One teams and for many years, starting a new season with a new team still gives me a sense of excitement,” said Vettel in a statement.

“I have always kept my eye on the competition and this team has consistently impressed me with what they have been able to do without the biggest of budgets.”

Vettel said he was immediately motivated to join the team when he was approached by Stroll, and Otmar Szafnauer, the CEO of the Aston Martin Formula One team.

The AMR21 will make its track debut on Thursday before traveling to Bahrain next week ahead of the Bahrain Grand Prix.