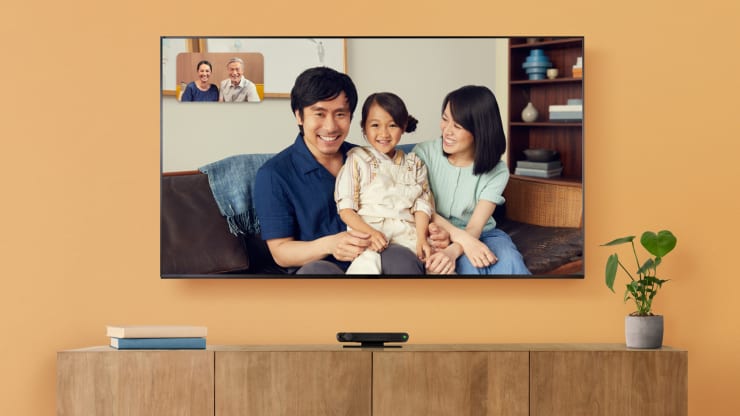 The device comes with a camera and microphones and allows users to make video calls from their televisions over WhatsApp and Facebook Messenger, as well as to stream video from Amazon Prime Video, Facebook Watch, Showtime, Starz and others. It will cost $149 and begin shipping Nov. 5.

Perhaps the most interesting part of Portal TV is the social aspect. Once you’re connected, you can watch shows together on Facebook Watch or play augmented reality games. Facebook is also showing sensitivity to privacy concerns, giving users an easy way to cover the camera and turn off the microphones when not using the device.

While tech mega-cap peers Google, Amazon, Apple and Microsoft have experienced varying degrees of success with consumer devices, Facebook has failed to find much of a customer base. Last year, the company released the Portal and Portal+ video chat smart speakers powered by Amazon Alexa, but sales were minimal. Facebook said in July that second-quarter revenue in the payments and other fees segment, which includes Oculus virtual reality headsets and Portal devices, rose 36% to $262 million, accounting for less than 2% of total sales.

Selling the combination of a smart speaker and video-streaming product gets Facebook closer to an all-purpose streaming service as it goes up against stiff competition. Amazon and Google have video devices and services as well as smart speakers, and Apple is moving from a streaming box to a subscription TV offering that will cost $4.99 a month. Roku has built a $20 billion business selling streaming gadgets and licensing its software to TV manufacturers.

Facebook also announced the Portal Mini video chat smart speaker and a redesigned version of its Portal speakers, for $129 and $179, respectively, to start shipping Oct. 15. The Portal Mini features an 8-inch screen while the full-size Portal has a 10-inch screen like its predecessor. Facebook begins taking preorders for all three devices on Wednesday.

The original Portal devices were the product of the short-lived Building 8 division that Facebook launched in 2016 in an effort to expand its hardware offerings.

According to IDC, Facebook has shipped just over 54,000 Portal devices since its launch. Facebook has said the IDC number is not accurate but hasn’t provided an official figure.

Facebook is experimenting with other gadgets as well. CNBC reported on Tuesday that the company has been working to develop augmented reality glasses for the past couple of years, but after struggling with product development, opted to partner with Ray-Ban parent Luxottica. The goal is to get them into consumers’ hands in the next four to six years, according to people familiar with the matter who spoke on condition of anonymity.