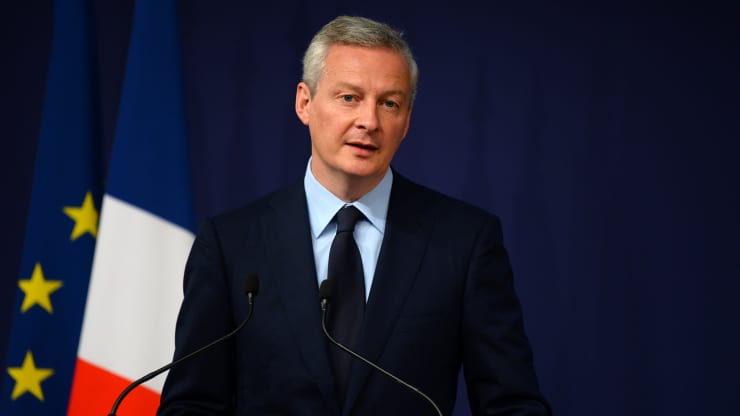 France is taking aim at big U.S. tech firms again — this time in the direction of Facebook’s proposed cryptocurrency libra.

“All these concerns around libra are serious. So I want to say this with a lot of clarity: In these conditions, we cannot authorize the development of libra on European soil,” Le Maire said, according to a translation by CNBC.

Le Maire has been an outspoken opponent of libra since Facebook unveiled the project in June. In addition to concerns the cryptocurrency could undermine the sovereignty of other nations’ currencies, he has highlighted issues with money laundering, terrorism financing and market dominance. Regulators around the world have echoed those fears.

In his remarks Thursday, Le Maire said he had spoken with ECB President Mario Draghi and Christine Lagarde, who will be the next chief of the central bank, about creating a “public digital currency.”

Unlike central bank-backed currencies, libra would be overseen by an independent nonprofit based in Switzerland called the Libra Association. Facebook, along with 27 other companies like PayPal, Visa and Mastercard, were founding members of the Libra Association. The goal of the project, Facebook says, is to enable fast, low-cost payments and money transfers for people around the world.

Dante Disparte, Head of Policy and Communications for the Libra Association, said in a statement Le Maire’s comments “further underscore the importance of our ongoing work with regulatory bodies and leadership around the world,” and added the Libra project has become “the world’s most scrutinized fintech effort.”

“We welcome this scrutiny and have deliberately designed a long launch runway to have these conversations, educate stakeholders and incorporate their feedback in our design. The Libra Association and its members are committed to working with regulatory authorities to achieve a safe, transparent, and consumer-focused implementation of the Libra project. We recognize that blockchain is an emerging technology, and that policymakers must carefully consider how its applications fit into their financial system policies,” Disparte said.

On Wednesday, the Libra Association said it will apply for a payments license in Switzerland, confirming the country will be home to its main supervisory authority.

France has taken a leading role regulating big technology companies in Europe, passing a 3% digital tax on a handful of U.S. firms like Facebook, Amazon and Google.