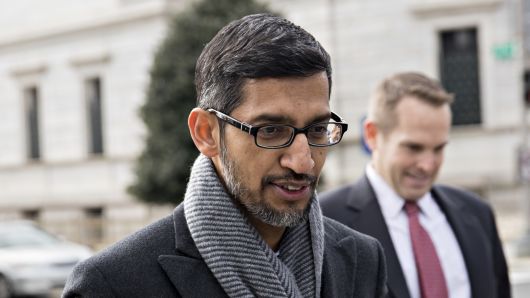 Google CEO Sundar Pichai will meet with the chairman of the Joint Chiefs of Staff Chairman, Gen. Joseph Dunford, on Wednesday after the military chief said the company is “indirectly benefiting the Chinese military” through its work there.

“We watch with great concern when industry partners work in China knowing that there is that indirect benefit,” Dunford told members of the Senate Armed Services Committee at a March 14 hearing. “The work that Google is doing in China is indirectly benefiting the Chinese military.”

At an event last week, Dunford announced he had at least two meetings planned with Google. A source confirmed to CNBC that Dunford will meet with Pichai in D.C. on Wednesday. Google and a Department of Defense spokesperson did not immediately respond to requests for comment.

Google has slowly renewed its efforts in China after withdrawing its search service from the country in 2010 amid growing concern about censorship and cyberattacks. Lawmakers and Google employees were outraged when details for the company’s plans for a censored search engine in China leaked and were reported by The Intercept.

Tech employees working for Google and other giants like Microsoft have sparked internal backlash over their companies’ decisions to provide work with the U.S. Defense Department, arguing they did not choose to develop products that could be used in warfare.

Google employees protested a partnership with the Pentagon called Project Maven, which involved developing AI surveillance tools to analyze drone footage. The company told employees in June that it would not renew that contract. In October, Google dropped out of the competition for a different Pentagon cloud computing contract that could be worth $10 billion, saying the contract could conflict with its values.

—CNBC’s Josh Lipton and Amanda Macias contributed to this report.